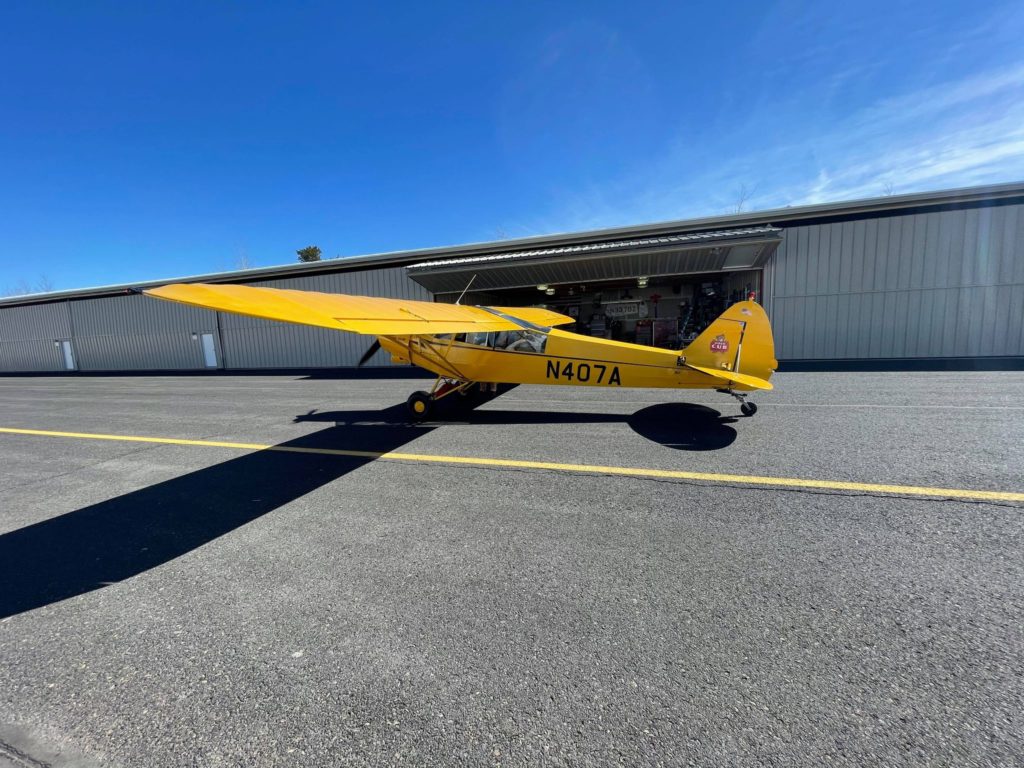 The Piper Super Cub was designed as a more modern replacement for the original J3 Cub.  Designated the Piper PA-18, the Super Cub, with a bigger engine, stronger landing gear and flaps, is able to go places the original Cub with it’s 65 horsepower engine can’t.

Despite the significantly different performance of the original Cub, the PA-18 retains the same docile handling characteristics of the J3 which is so known and loved by generations of pilots and gave it a reputation as an excellent training aircraft.

Our Piper Super Cub is the 150 horsepower model and originally built as a military liaison aircraft, hence its “glasshouse” styled windows to allow a battlefield observer improved vision.  The original J3 Cub had the fuel tank mounted behind the engine and just forward of the front seat passenger, requiring solo flight to be flown from the rear seat only for centre of gravity reasons.  The Piper Super Cub had the fuel tank changed from being in the nose, to being in the wings.  This brought the centre of gravity further aft and therefore allowed solo flight from the front seat, improving the pilot’s visibility drastically!

Previous to the Super Cub, we used the Piper J3 Cub for our Tailwheel Endorsements.  Recently we made the decision to sell the J3 and upgrade to the PA-18 Super Cub.  As much as the J3 is very much missed, the PA-18 has some qualities that can’t be overlooked that make it more practical as a trainer, not least a starter motor and electrical system!

To read about the J3 visit our page on the Piper Cub here.

To book your tailwheel training in the Piper Super Cub click the link below to get in touch.

Welcome to the Blue Sky Family! We’ll keep you in the loop with all our special member only offers so be sure to check your email!

Join our email list to get notified about empty legs and special packages only available to the Blue Sky family.

Don’t worry we won’t spam you and you can unsubscribe at any time.

We’ve received your quote request! We will contact you as soon as we can.